Difference between revisions of "HCL cluster" 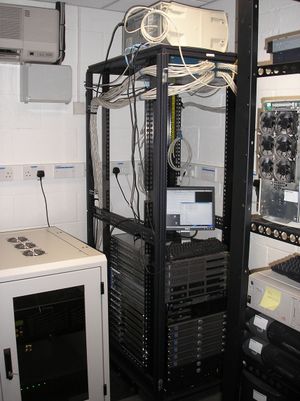 All access and security for the cluster is handled by the gateway machine (heterogeneous.ucd.ie). This machine is not considered a compute node and should not be used as such. The only new incoming connections allowed are ssh, other incoming packets such as http that are responding to requests from inside the cluster (established or related) are also allowed. Incoming ssh packets are only accepted if they are originating from designated IP addresses. These IP's must be registered ucd IP's. csserver.ucd.ie is allowed, as is hclgate.ucd.ie, on which all users have accounts. Thus to gain access to the cluster you can ssh from csserver, hclgate or other allowed machines to heterogeneous. From there you can ssh to any of the nodes (hcl01-hcl16).

Due to the nature of experiments run on the cluster, we often induce heavy paging and complete exhaustion of available memory on certain nodes. Linux has a pair of strategies to deal with heavy memory use. First, is overcommitting. This is where a process is allowed allocate or fork even when there is no more memory available. You can seem some interesting numbers here:[2]. The assumption is that processes may not use all memory that they allocate and failing on allocation is worse than failing at a later date when the memory use is actually required. More processes may be supported by allowing them to allocate memory (provided they do not use it all). The second part of the strategy is the Out-of-Memory killer (OOM Killer). When memory has been exhausted and a process tries to use some 'overcommitted' part of memory, the OOM killer is invoked. It's job is to rank all processes in terms of their memory use, priority, privilege and some other parameters, and then select a process to kill based on the ranks.

The argument for using overcommital+OOM Killer is that rather than failing to allocate memory for some random unlucky process, which as a result would probably terminate, the kernel can instead allow the unlucky process to continue executing and then make a some-what-informed decision on which process to kill. Unfortunately, the behaviour of the OOM-killer sometimes causes problems which grind the machine to a complete halt, particularly when it decides to kill system processes. There is a good discussion on the OOM-killer here: [3]